When I made Pizza a few nights ago I made a double batch of dough and kept half. I decided to experiment with cooking it as a loaf rather than a base. I added half a tub of pasta sauce, some bacon and cheese. I didn't mix very well but some was taken into the dough, what was left I poured on top of the free form loaf . I cooked it in a baking dish ( that my oven could accommodate ). 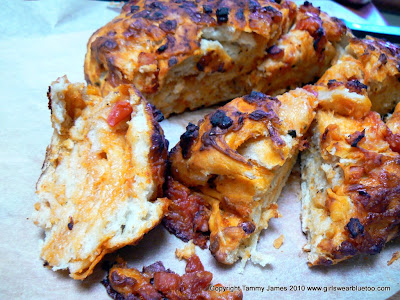 I started at a temp that was initially too high as the outside did get a bit charred before the inside was cooked.
All in all it was quite tasty. If I do it again I'll start a bit lower and turn the oven off sooner. Leaving it sitting in the hot oven was the best way to ensure it cooked through.