On Thursday, I decided to stop disadvantaging my poor out door lettuce and bring them in to the dining room sill with the others, which needed to be thinned out. So I pulled out the yoghurt pots and got to work.
Of what I originally though were 10 seedlings, has turned into 16 here and the lettuce I gifted. Of the 16 I have 5 varieties. Can anyone tell me what any of them are? This is my first time growing lettuce. 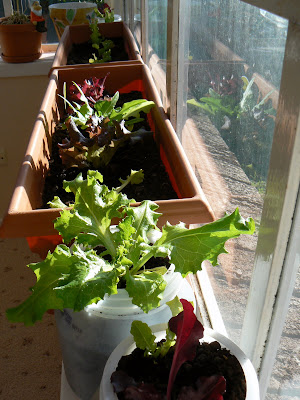 This photo shows them all along the sill, some are still doubled up in youhurt pots. 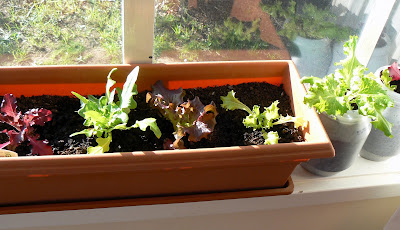 The lettuce in this photo were all growing on the window sill the whole time. I don't take them out doors anymore just leave them here in the sun. 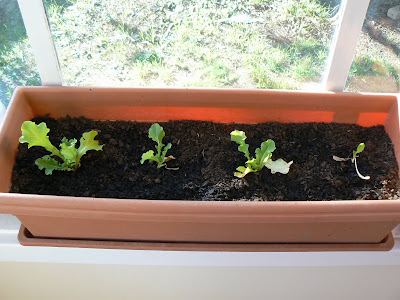 In comparison this is showing the ones that were struggling outside, planted at the same time originally.

In other garden news we planted Cherry tomato seeds into jiffy pots that same day, Our first Peas are breaking the soil - these are a late planting. Something has eaten over half the onions I planted so we are down to 8 now, I am covering them with milk bottles and jars at night to protect them. The Garlic and strawberries are doing really well!

Now on to the Bread.
Yesterday I made up a batch of Artisan Bread in 5 mins dough.
I had to take out the book as in the absence of oven I forgot most of my regular recipes. I make my dough in my storage container, so I started measuring out my flour added my salt (reduced amount) and yeast then went to put in my water, read the instructions and saw I was doing it all in the wrong order. I think I have made it this way each time...
I had an interesting predicament with the yeast ... I had previously been using sachets, till my shopper extroidinairre partner bought a canister of yeast much cheaper, so I had to measure. I don't have a 1/2 tbsp measure so ... Hmmm ... I realise there were some old, like really old from when I left home (20yrs) spoons in the kids craft box, I had a peek and there was a measure marked 1 1/2 tbsp !! Gold. So I washed it up, measured my yeast, threw it in, scratched my head ... it didn't look like 2 sachets. I thought that was an odd measure, I took my traditional Tbsp and found it held more than the one marked 1 1/2. So I don't really know what it holds but I threw in two of these measures of yeast. 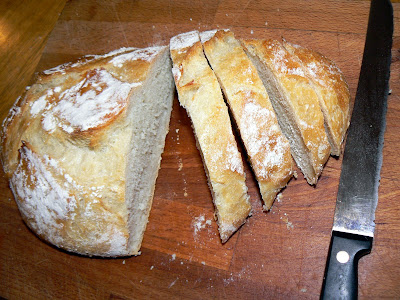 It was dry so I randomly added more water to incorporate the rest of the flour in the corners of the container. The Dough was wet and had over a two hour rise, this would have been the warmest day I had made dough.
I cooked it at 230c on traditional setting (top and bottom element) It baked and rose beautifully. It was an odd shape like a teardrop as it was my wettest dough yet I struggled to get it onto the stone and it kind of plopped. The loaf I have in the oven right now fell upside down, LOL, I quickly turned it and it is rather baguette like now!
The bread was delicious! I just have to work out a way to get it off the resting surface onto the hot stone, in the shape I want it! LOL. Oh and the bad news is that the bread rises too well to cook it in the lower oven with the addition of vessel for steam.