I knew I wanted to make something for my self with this yarn as the colours in it called to me. Citrus toned Orange is my favourite and this deep zingy shade is part of a gorgeous palette. 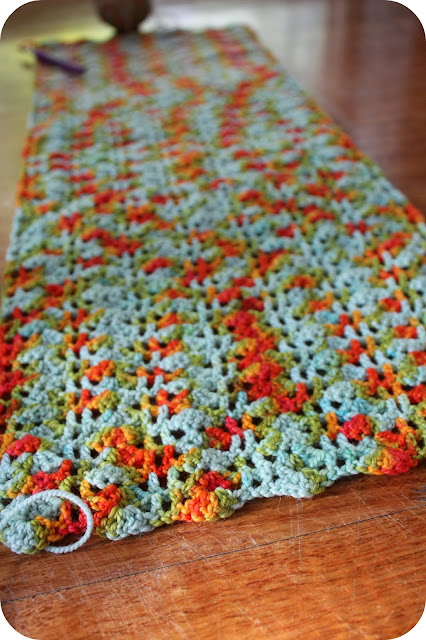 I haven't ever worked up a skein of Shibui sock and my brain does not compute yards printed on a label into an approximate size of finished object as I haven't really made many large planned out things yet. The pattern said I needed something like 650m of yarn, my mind said surely not, I'll just work with what I have and see what happens. 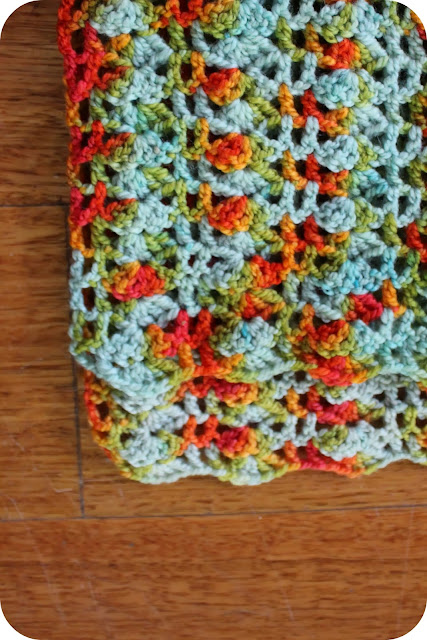 This pattern creates a ripple at the end of your work so you work up half of the scarf and then go back working into the original foundation chain and make the other half so that each end of your scarf has the pretty ripple. As I started to get through that first skein I pretty quickly realised I would not be making an entire scarf from just one, it was not going to be long enough and then my dye lot thoughts started to creep in I worked the pattern with half the yarn then cut and loosely secured it and then worked the second half. I tried to get a dye lot match but it was not to be and as soon as my addition skeins arrived I immediately noticed the tone of the dye was not as intense and the colour was lighter over all. :(
My plan now is to work one entire skein ( dye lot matched ) to either end of the original piece. 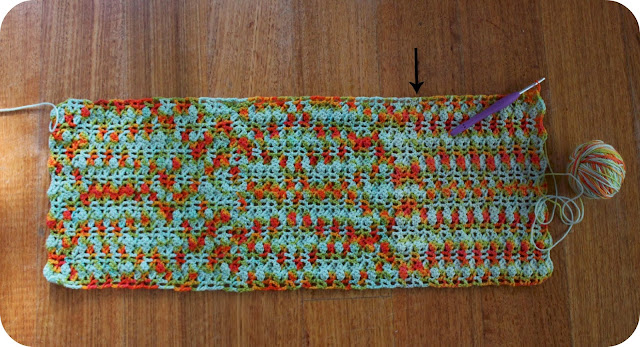 I've learned a lesson about variegated yarn pattern variations with some really pretty ellipses being created in one half of the original piece. You can see where I joined the second skein, I marked it in the photo if its not immediately obvious. This one creates a linear colour pattern that works its way along the actual design of the scarf.  When I lay my work out like this it really displeases me but at the end of the day its a scarf and it going to be all scrunched up around my neck Shhh  no one will even know! ....  well you guys do but its our little secret ok.