I deserve a treat 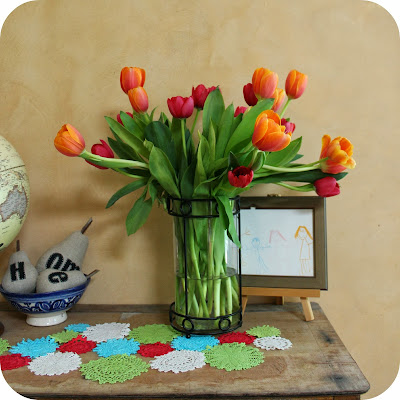 I went to the markets last weekend, I had been putting it off and as it turned out we arrived late on Sunday afternoon when there were plenty of bargains to be had. I got most of what was on my list and came in under what I usually spend. As I wandered towards the next fruit and Veg vendor to see if they may have my missing items it happened I had to pass the florist, who had all her bunches marked down to $5.00 each. $5.00 for long stemmed tulips! she had two bunches of Orange left and orange is my favourite colour!

"I deserve a treat!"


... well, that is what I told myself.
When the voice that said 'just walk on by' piped up the other voice got more insistent and louder ... I deserve a treat, great bargain, I don't have these in my garden ....  these were some of the rolling justifications that went through my brain. I had to use the credit card to pay and was thinking that if I just bought one bunch and spent under $10.00 this would probably not be possible as this seemed like a store that would impose minimum spend limits. I could get two, which would really fill my vase gorgeously and still come in at under the regular price for one bunch! So I grabbed a red and the last remaining orange ( yep someone grabbed the other orange one while I was busy justifying the spend )

Flowers are not something I usually buy. I love flowers but seriously! I have a garden full of the most dazzling array of seasonal blooms. Can cultivated tulips bring me more joy than a wander in the garden while soaking up the calm and collecting a colourful posy? I know $10.00 is not a lot in the grand scheme of things but when I think about what else $10.00 could equate to  it really could have been better spent. This has me thinking about how I talk to myself about value... Its not just monetary.

We still don't have any onions.