Can you say La la la?


My boy is bringing home his 'magic word book' now and is on his second set of letters. He has always had more trouble with pronunciation than big sister. Over the last 6 to 12 months I have had more of a personal focus with him on how to pronounce things and more recently with focus on how to hold his tongue, teeth and lips to gain the correct sound.
For R and L sounds he always fell back to more of a W sound. So for example 'grass' and 'glass', when said by him, would sound the same and we would take the word in the context of the statement to know what he meant. The homework exercise is to practice saying the name of the letter one night and its sound the next. He sailed through the first 5 letters one of which was R, we had personally been working on R recently so it tied in nicely. However we hit the wall this week with a group that has G and L in it. He would not want to do the sounds as he could not make the sound for L, and G is just tricky for him to remember.
One of the ways I try to help him is by playing word games so we say words that start with the letter with a drawn out sound at the beginning like GGGGoat, GGGGreen, GGGGordon etc We try and make it fun and there is lots of Laughter, if it starts getting too hard or frustrating we stop. I always talk about how it takes time to learn anything, and practising. I also acknowledge that it is hard to learn or form a tricky sound correctly and state that we will be practising again another day. :)
After Bed time story last night I said lets just play the sounds game and see if we can remember some letters don't worry about working from your book. I threw a lot of random easy ones and unpractised ones in before L. He couldn't make a lovely LLLLL sound and was a bit upset so I started saying some silly LLLLL words LLLLike LLLaugh and then I said Oh can you say 'LLLa La la' and he did! Pronounced perfectly!
Oh the look on his face when he clicked, that the sound for 'L' is the sound at the start of 'La' was absolutely priceless! He layed in bed saying LLLLLLLLLLLLLLLLLLLLLL over and over again with the biggest grin. I giggled with unbridled pride which made him Grin even bigger and LLLLLL even more.
When he came back out to tell Dad and started firing out the L words with the long drawn out LLLL sound at the beginning he threw out Llllove, Lllllove hearts and Lllllove you! 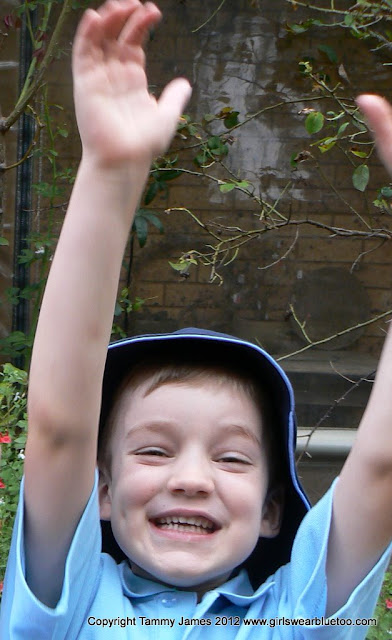 Isn't that moment when you just finally 'get' something that had eluded you previously, just supreme?

I hope you all have a most LLLLovely Day! x