A tale of Two Barbies.

Let me begin by saying that I am not writing this to invite debate, criticism or negative comment on Barbie, having Barbie or playing with Barbie. I am voicing my opinions and observations and using it to illustrate how things have changed.
Now let me introduce you to Barbie, for the purpose of this post lets call her 2010 Barbie.
She was the most generic Barbie I could find when I bought her for my Daughter earlier this year.

I didn't want to buy her a 'themed' Barbie as I was quite sure my Daughter would pigeon hole her in that role and be limited in her play. Eg 'Snow White' Barbie would only be snow White, A Doctor or Musketeer would only continue to be played with in those roles. As it is School Holidays for us Now I thought it might be fun to take my Barbie out of Storage and we could play Barbies together.
Now let me introduce you to 'great Shape Barbie' from 1983 for the purpose of this post lets call her 1983 Barbie. Yes, I was 12 in 1983 and I think probably even older than that when I got this Barbie which goes well towards illustrating the change I am talking about here.

1983 can't stand unaided as she doesn't have very high heels to balance her.
Ok so lets look at some differences. 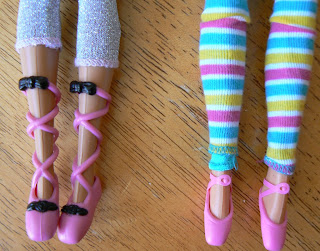 Barbies ballet shoes have gotten a lot more elaborate and are much easier to put on in 2010.
Her leg warmers are also moulded plastic. ( not shown in this pic ) 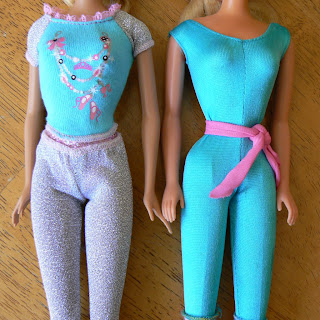 Barbie's Bust, waist, Hip ratio seems to be quite a lot more appropriately proportionate in 2010 also 2010 Barbie has much larger hands.
Admittedly 1983 Barbie is wearing Lycra but that waist is sincerely teeny tiny. Lets look at it side on now .... 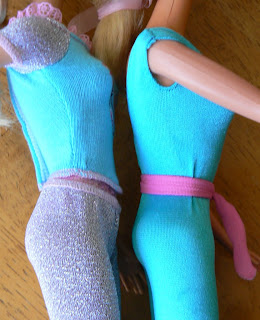 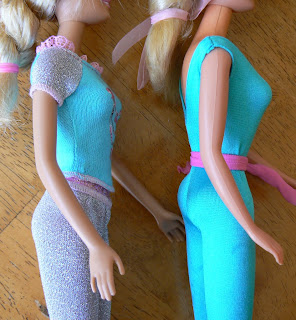 1983 Barbie definitely has more curves.
None of these really affected me too much at all either way what actually made me gasp was this 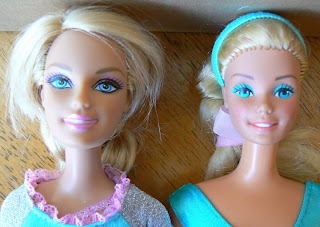 1983 Barbie has a 'pretty' face and a dimple on the left. Not to mention Cheeks, chin etc. 2010 Barbie is chiselled, with less detail in her face and ears.
My perception is that 2010 Barbie is celebrity and media. 1983 Barbie is more 'Everyday'.
They both wear make up representative of the times they were created in. 2010 Barbie's eyes are BIG as is her smile but then so is her head. She has dark lined eyes and warm eye shadow, where 1983 Barbie has blue liner and shadow. 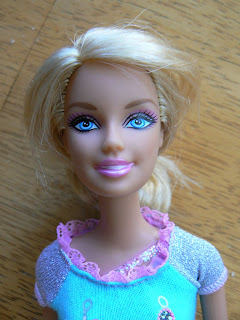 I do accept that, as I said, these dolls each are representative of the times we live in and I do have my preference, which is for my own doll. Though if I asked my daughter ( which of course I won't ) I'm sure she would choose her own. My preference lies in the memories of my doll, the feelings associated with her and a recollection of simpler times when as a Child of 12 I was playing with a Barbie, there was not the amount of advertising and world of options that kids are exposed to now. There was not the same Focus on Celebrity that there seems to be now. 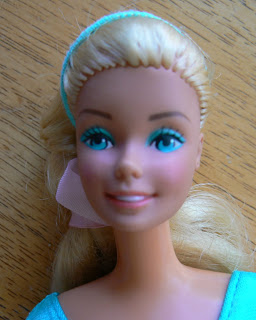 When it comes down to it Barbie is a doll. I don't think she overtly influences my daughters perception of Body image. She did ( correctly ) note our dolls look different and her dolls clothes wont fit mine ( 1983 Barbie can't do up 2010's tops ) But aside from that she doesn't see a difference. They are both dolls that we will play with together today. To her Barbie is a Ballet dancer, a musketeer, a teenager, Princess... These are the games she plays herself and the roles she also put Barbie into.
I think my Barbie will come out of Storage for some gentle playing more frequently now, just as the reminder that yes, like people, Barbie's are different. There is not a 'normal' or 'better'. There is no perfect... Just perfectly happy in any moment of Play. Like the 4 consecutive cartwheels flexible 2010 Barbie did across our lounge room yesterday : )
At the end of the day I think comparing the Barbie's is only of significance to me, making me nostalgic for the quite simple childhood I was able to have and that my children won't get to see from the same perspective. Because times are changing, times have changed, and all we can do as parents is let our kids live as simply and innocently in childhood as is possible for them to - today.