We bought our kids a Trampoline for Christmas.
On Christmas day it rained all day long, then we went away for two days, But now its dry and they can use it and they do!
When I start to prepare breakfast they say 'After Breakfast can we get dressed and play on the Trampoline?'

This reason for them to go outside is a new found freedom for me.
We can see the trampoline from the kitchen and main living area windows quite easily so I can hear, see and  monitor what is going on out there. Prior to this our yard has been barren so they need to be coaxed, prodded and pushed to go outside. Which I do understand, why would they want to be out there with nothing interesting or engaging to do. They would make up little games and ride bikes on the rough terrain though it would never last long.

Maybe if we had out laid a few hundred dollars on play equipment a couple of years ago we could have saved thousands in Childcare costs. Just having them happy outside really is a different, good free mental space for me to be in to get household things done. I am a person who needs some quiet and solitary time frequently to recharge my introvert core or it affects me very negatively thus affecting our our household in a negative way.

In light of this fun my kids are able to have out doors self entertaining it has encouraged me to look further a field for other options. On the days that Dave was home this week I culled, de cluttered and re organised the kids bedrooms and furniture. Shoved way under Mr3's Bed I found a Christmas present from a year or two ago. It was a small dome tent and a Tee pee style tent connected by a little tunnel. I do recall having it set up indoor's at some stage and it was intrusive and when they used the tunnel it would make the tents fall down. So I guess it was put there to save the frustration. 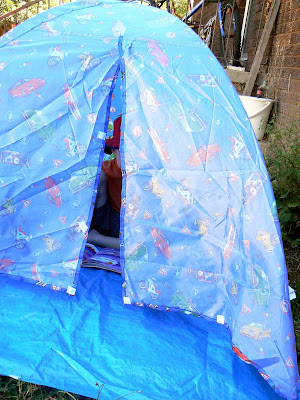 So yesterday when I said I was going out to hang the washing I spent some time building the individual tents  ( minus the tunnel ) They were so excited when they saw them Miss5's excitement didn't last too long but Mr3 who had earlier taken a book out to the trampoline to read claimed the dome immediately and took a book stash with and spend a good hour or so in his 'tent' reading. 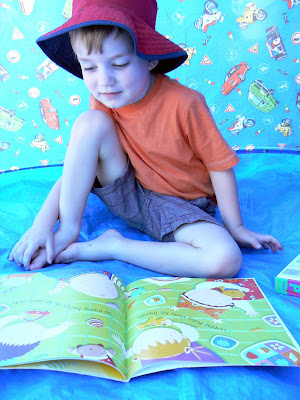 It was too hot in the middle of the day so we left the tents in situ and had an indoor time. When I went out in the afternoon to move them to the shady side of the yard the rigid flexible pieces that give the dome its shape had both snapped in half! Bummer ... just cheap and old I guess, they were plastic. He was upset that 'his' tent was broken and Miss5's tent still stood. I explained they they were really both his tents and he shared with her etc. He wanted to bring the tee pee inside ...

Guess what happened next ... 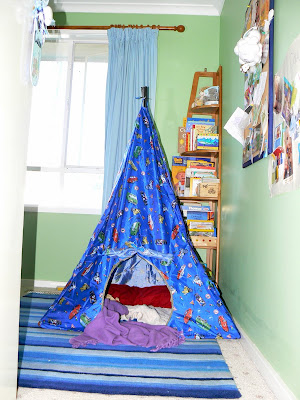 Yep ... 'Mum ... can I sleep in my tent?' I said we would talk to Dad about it. I had no real objection but just wanted to check ... Dad wasn't so sure about it but we discussed it and he said OK.

Mr3 had arrived shortly before we spoke telling me he had packed his tent with his red Cushion ( pillow ) and Teddy ... Oh what a cutie! 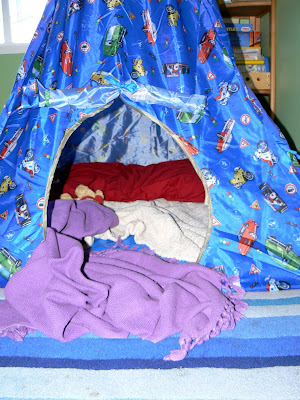 I laid a folded bath sheet on the tarp floor for a bit of extra softness and when he was well asleep put a cotton blanket over him. He slept there all night, we closed up the main opening with the velcro and told him he had to keep the tunnel door open we could look in easily and I could still poke my head and shoulders in to check he wasn't too hot, it was also convenient for passing his drink through later in the night ... Ahhh what an exciting adventure for a little boy!