After those few crazy hot weeks we had before Christmas it has calmed down to a much more tolerable high 20's to low 30's range. It rained all day long Christmas day and On and off for the next couple too.
Last week I noted new bursts of growth on the peas and ... 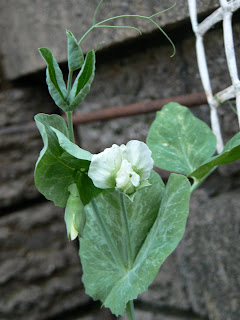 now there are flowers : )

I did also take a pic of some pretty potato flower buds but it was blurry, a shame as the flowers won't be there tomorrow, something eats them off in the night ??

Right now I have Romas looking good ... some sadly getting the insides eaten out by something. 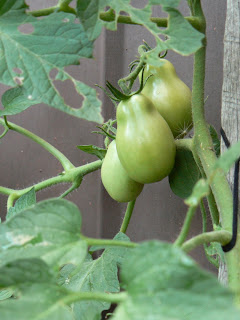 When we got home on Sunday I was excited to see the first tinges of orange on one and reached down, only  to feel the holes in the underside, I'm guessing slatters and earwigs again, as with the strawberries. 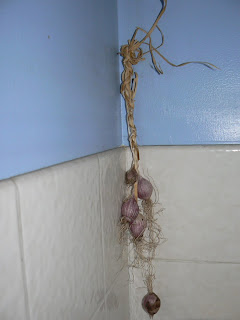 This is my Garlic, my first try at uneducated braiding. I had to harvest it a little earlier than I would have liked, it was in a shallow pot and the tops really died to brittle breaking in the heat, I didn't have great results but it grew, and was not devoured by pests. I will try garlic in the ground next year and will probably try organic seed. This is second generation supermarket purple that I first planted last Spring. 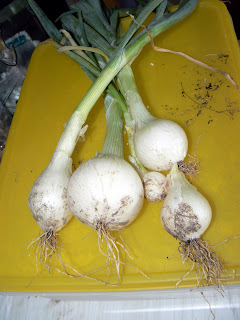 This was the last of my onions, again a mixed bag but I'm not at all unhappy for a first try and think I might give these guys a go in pots next time. Now that I see the root and growth habits. 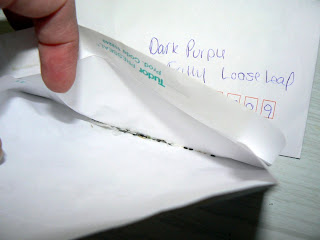 I'll get a third variety seed tonight but be lucky if I get more than that as they are mostly dead and finished, I would have liked some seed from a brown too ... will see over the next few days.

I am watering a neighbours garden while they are away and took these juicy cherries from there tonight. 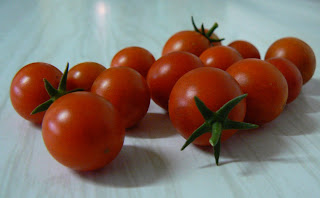 My own heirloom cherries are growing so much better this year than last and are flowering now so I will share some pink fruit pics soon I hope.

The neighbours I am watering for gave us the contents of their crisper and I offered a bag of Aubergines to another neighbour as we wouldn't use them, he gladly took them and went and cut me some bounty from his garden in return. Shared a recipe for Zucchini soup too. 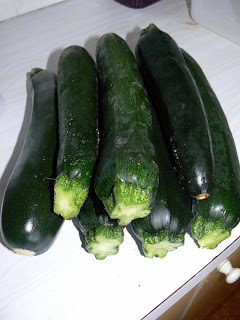 When we were away I was impressed and lucky to see my Step fathers garden. My Mum has had some changes in financial circumstances in their home last year bringing what could be called hardship. So I was stunned when he struck up a conversation with me about my garden and my jaw dropped when I ventured out to peek at his and saw most of the open space of backyard was converted to garden beds full of radish ( oh I got some of those too! ), potato, zucchini, pumpkin, peas, onions, beans, tomatoes, spinach and at least a handful of other things I now don't recall! My younger sister's that live in the same town are lucky to share in that bounty! It was good to get a different perspective on planting and garden techniques from him.

Most of my time right now is being spent de cluttering and reorganising. I really dropped the ball in December and let things get out of control here. In the last two days I have cleaned, culled and rearranged my kids rooms. No mean feat in my creative Miss5's room. I am breaking it down into chunks and liking what I see materialise. I am wondering again is it my environment that affects my state of mind or does the clutter in my mind materialise in my environment? A circular puzzle that pops up from time to time.

I hope you are enjoying some yummy garden bounty, in a nice clutter free environment, in your life right now. ; ) Thanks for stopping by.