Not a bit of waste!

Miss 5 Loves Purple lately so when I saw this T Shirt on sale for 5.95 I bought it knowing I'd refashion it into something for her. After a recent surge in heat here a summer wardrobe assessment was needed and a shortage of shorts discovered. 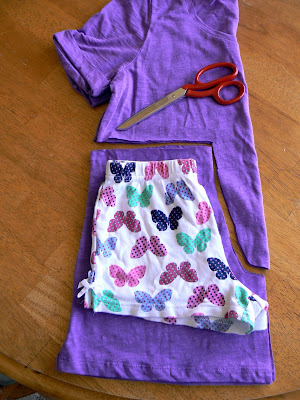 So I took a pair of her shorts that fit now, folded the shirt in half and cut out around them allowing a fair bit of extra length and an allowance for seams. The good thing about refashioning a shirt like this is that the side seams and hems are already done for you : )

Then I had a brainwave to make what was left into a light swingy cardigan.
I cut straight up the centre front and hemmed the edges. I used the pieces remaining from where I cut the crotch of the shorts, folded it and sewed the seam attaching it as a tie closure at the front. 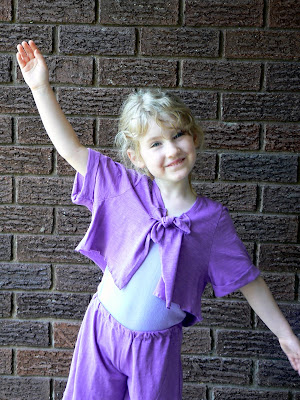 At the back I formed a pleat on the existing neckline to pull it in to a width short enough for her. I didn't hem it just did a shallow zig zag close to the edge, it will curl back onto itself. 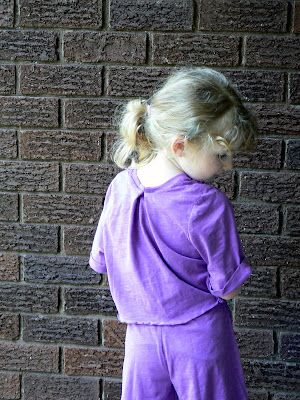 Later I decided to embellish it a little adding a decorative button at the top of the back pleat. 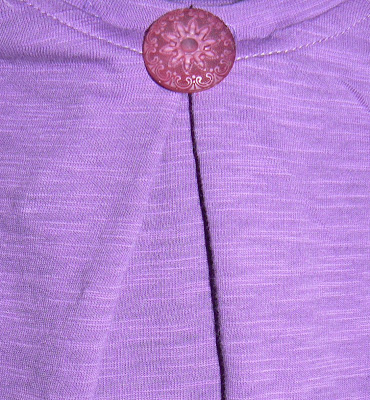 A sweet little breezy summer out fit for just a little over $6.00 when you take the thread into account. The best bit ... not a scrap of the original shirt wasted, only a teeny tiny sliver from a trimmed seam went into the bin. I made a gorgeous skirt for her too but it was too dark to take pics of it by the time I got around to it.