The day here started grey and the forecast was for 21.
So I set out weeding the yuckky messy patch of ornamental plants I had not yet dug out, down the end of the strawberry bed.
As I got to it I just decided it was time to bite the bullet and get rid of this last bit. It was a remaining patch of bearded Iris long neglected and a haven for snails. Having then there was virtually inviting them to eat the soon to be berries. 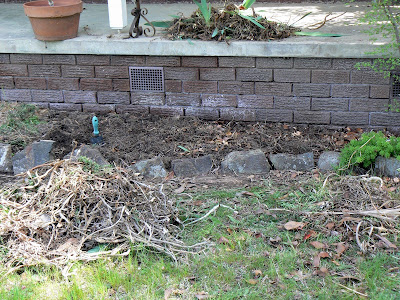 This runs along the front verandah of our house you can see in this pic the two piles of dead stuff I pulled out and all of the rhizomes and pups up on the verahdah edge. To the left of the pic at the edge of the existing mulched strawberries is the patch of pulled weeds. To the right just out of this pic I removed a medium sized lavender and transplanted it to a place where it will get more sun and I hope flourish. It was really poorly positioned there. I do love lavender and put it near my clothesline, I won't be surprised if I have done the wrong thing with it and it dies, but I hope it doesn't, it has a lot of lovely new growth just now.
This was only a small patch but took about an hour and a half I guess. I couldn't get a good pic of the lavender will try again tomorrow.

This afternoon I hit the kitchen finally cooking up those apples from last week. I had meat pie on the menu and as it was just Mr3 and I here I made us individual pies and a family one to freeze. I love the pastry setting on the new oven as it means the bottom of pies brown and crisp up nicely with the heat coming only from below. 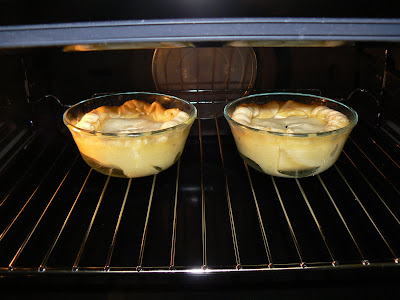 I'm still using pre packaged pastry ( not making my own ) and to freeze a family pie I use the liner from between the pastry sheets in the pie dish. I make the pie on this, with the filling already cooked and the pastry raw, I then freeze this and when it is solid or semi frozen, I can easily remove it from this pyrex dish by lifting the liner. I then simply remove the pie, bag it and label it and leave it in the freezer for a later date. This frees up the pie dish if I want to use it in the mean time and also means I am not putting frozen pyrex into a hot oven, or needing to defrost first. 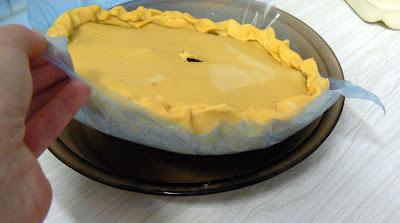 My other top tip for freezing is silicon muffin moulds! I make party pies in these and they pop right out for storage in an airtight container. Today I spooned all the cooked apple into the muffin moulds and will do the same with it tomorrow, its a perfect portion size for cooked apple as one would make an individual pie filling two would be right for an addition to apple muffins or cakes. I've never tried it with apple before. I bought the silicon earlier in the year as curiosity got the better of me, I really didn't like it for baking but have definitely got my moneys worth with the freezing option. so easy to pop those frozen sections out of silicone!

I had a little pastry over from the small pies and so made some small apple turnovers ... I had planned to serve them for desert tomorrow but I just ate one with my tea! LOL ... I think I might have a second too!

All about the oven. Cooking. Food. General Home