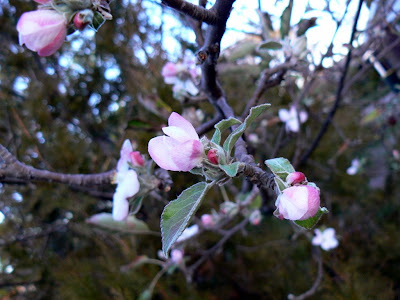 I was surprised as I looked out at the Rosellas eating the last of the dried crab apples from the tree to see these. These last few days have had a chill to them as we head into winter. Though my tree having so many blossoms now would attest to the fact that Autumn has been mild.

This morning I reached the end of the first ball of wool, pulled out the second to join it and ... it didn't match! OMGoodness. Lesson learned, check dye lot, and even if they say they are the same get a good visual confirmation first.
They were labeled as the same dye lot, not that I had thought to check, but the yellows were very different, the one I was using was golden and warm and the second ball was pale, very pale.
I see now that I have made the Scarf too wide for her little almost 5 yo neck, but am not overly concerned as in our chilly winters she will not notice it and I am hoping she will wear it for a few years before she decides its not right, or that she doesn't like it anymore.
So off I trotted to lincraft, knitting in hand to get a better match.
While I was there I chose the wool for Sab's Scarf too, After I started Lil's I realised it was a little redundant considering she already has two, and he has not one! I was surprised to note the variations between the three dye lots of the darker colour I chose for his.

LOML took the kids out this afternoon, and as darkness is falling now, there is a real chill in the air, while they were out I cooked up a pot of apples ( and got though a mound of other things too!) and have now put a leg of Lamb in the oven. When they open the door they will be welcomed by the warmth of the heating and enveloped by delicious aromas too, what a wonderful thing to come home to!
Cooking. Food. Knit Knitting