"Let me hold you while I may, for it may not always be so"

Well here I am starting a post about something much more personal than I would usually write about here but for myself I need to record it. This is a topic that I have found people to be VERY opinionated about,so I would just like to say upfront that this is my experience, thoughts and feelings and if you don't like it don't read it OK.

I breastfed Miss until she was 14 months old , by that stage we had mutually weaned down to one feed a day at bedtime and she decided one night she was over it and refused, I tried the next night and she wouldn't even look at it. I was very upset at the time, while I had not planned to go on indefinitely and knew the end was somewhere near, there was no definite end point in sight for me at the time and I felt extremely rejected and sad that the 'baby bonding' was OVER. IYKWIM.
Then after a few days my wondeful partner shone a light of different perspective on it for me saying 'Don't you think it is better that she has decided for herself rather than you deciding and her not wanting to go along with it ?' This was what helped me to accept it readily and move on.

Fast forward to Mr. My breast feeding experience with this little man has certainly not been the easy Street it was with Miss . I have suffered numerous blocked ducts and had Mastitis too. So I certainly see an end in sight to this much more easily than I could with DD but in having said that I still don't know when that will be, I am still hoping it will be mainly mutual.
Right now Mr is teething and on about day 4 of a yukky head cold. The first day or two he struggled with congestion and took frequent 'breathers' when feeding, we used Saline to try and help alleviate it. He still has 4 breast feeds a day in addition to 3 solid feeds at each breast feed he has both sides, on the second and third day he refused one side at one of the 4 feeds during the day.
Yesterday he refused both sides all day !!!!
Not only did he refuse but as soon as I reclined him into position he would shove and cry in distress trying to get away. I tried at each scheduled feed ( and a few more ), I tried different positions too. By the end of the day I was thinking that this may be the end, I had a feeling of despair and was a bit sore and Sorry for myself after a day of hand expressing.
Even though I haven't enjoyed it in the same way I did with DD I was certainly not ready for this abrupt rejection I found myself remembering a LO Kathie Link had in FK last year with "don't forget" and journalling including something about a sleepy 'milk drunk' baby and found myself thinking about all of the times I had thought to do something in the same vein and journal about those special little things like the tiny fragile baby hand on my rib cage and the gentle twisting and playing with my fringe and hair as he got older while I was feeding him.
At this point I could not even recall the last feed : ( 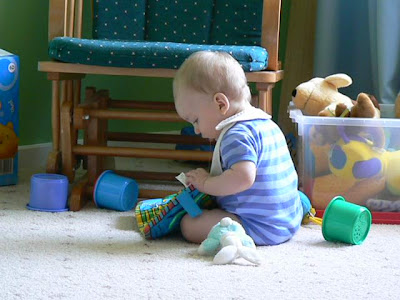 I am happy to report almost 10 hours after I started to write this morning that we are back to our normal breast feeding schedule, the first one with a bit of coaxing and a little trickery on my behalf and the rest totally voluntarily.

I saw this quote on a LO by Suz Doyle that seemed quite appropriate...

"Normal day, let me be aware of the treasure you are. Let me learn from you, love you, bless you before you depart. Let me not pass you by in quest of some rare and perfect tomorrow. Let me hold you while I may, for it may not always be so.” Mary Jean Iron.

What is it in your Normal days that you don't appreciate as the treasure it is?