Not much time on my hands for blogging these days, Not for posting or surfing. I've been spending less time at the computer and still feel like a mouse running in a wheel, wearing myself out and getting nowhere.

I do one basket of washing and two more appear... you know how it goes. I have not finished our Christmas shopping I have the hardest member of our family to buy for IMO, though I do have our Children all wrapped up now : ) and have just decided I will probably make a little brag book for Dad.

Have not been creating lately either...

Except for the online class I was lucky enough to do at Pink locker Project with Suz Doyle on the weekend, I have pretty much kept her layout design but mine doesnt look much like hers at all. I wasn't sure what to expect not having done one before but PLP had it all set up wonderfully with a chat window and Suzs directions were clear and easy to follow, I finished it off today, as it was a bit of a luxury to shut myself in the bedroom to Scrap on a Sunday afternoon leaving my wonderful man looking after the two Children. 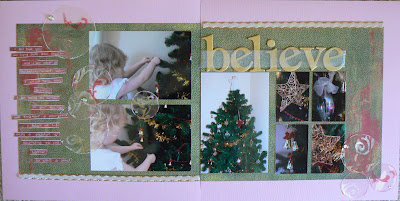 You can see Suz's original here

We found out my Children will have another cousin next year ( though it's still early days yet so I won't share any more until the first 12 weeks have passed )
Had a phone call from Sara last week too, she is in London now and suffering a major case of Culture shock after spending a year in Japan which she loved. Its hard to believe she has been gone a year already.

Miss fell on the way to Daycare today and skinned both of her knees really well, the worst she has ever had and on both sides :(

Mr. .. whew!!
He has really been giving me a hard time with daytime sleeping for almost a month now and this last week has started waking for a night feed at around 1.30 then the day starts at 5 to 5.30.

He is sooo active and wears me out already, he has been commando crawling for a few weeks now and discovered the rest of the house this week, he LOVES Miss's room and this has already caused a few tense moments ending with me trying to barricade the door with something easy for her to get over and hard for him to get over/around/through. Yesterday he came into the kitchen on hands and knees and I've seen him going around that way about half the day I guess and commando the other times. He pulled himself to stand holding onto the couch today, hes been doing it in his cot for a few days, he took one side step once he was standing ... not long now. This week those fine motor skills seem to have clicked up a notch or two as well and I see him picking up Miss's SAO crumbs and this morning a moth .... Its not going to get any slower or quieter for me LOL! 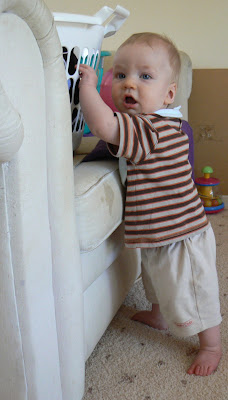 Now onto ... Tiles, has everyone got a theme in mind yet?
I've had a few replies ...
Sharon - Red, Green, Gold Christmas
Glennie - Monochrome blues Sea theme
Gillian - Rusty Old Junk ... think brown tones, buttons, coins etc
Tammy - Cuppa and Chocolate ... think all things Brown yummy and comforting.
Sam - Black and White
Brenda - Brown and Blue.
I think this is it so far so you other girls still have a couple of weeks to decide what you want to have and get tiles ready to start :)
Home